Taking a Weapon through Airport Security: Prohibited Weapons in Texas

I am seeing more and more people arrested at Dallas Fort Worth International Airport and Dallas Love Field for having a gun or knife on them when they attempt to go through the screening at the airport. The law states that a person commits an offense if the person intentionally, knowingly, or recklessly possesses or accompanies a firearm, “location restricted knife”, club, or prohibited weapon in or into a secured area of an airport. 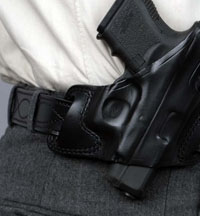 With the new heightened standards for airport security, if you forgot your handgun or knife was in your purse or bag when you go though security, you will likely be arrested and charged with the felony offense of Unlawful Carrying a Weapon Places Weapons Prohibited.

The good news for you is that accidents are still accidents and not crimes. Even though the state will not be required to prove you intended to bring the weapon into the secured area, they will have to prove that your actions in doing so where so reckless that you must be held criminally responsible.  Twenty years ago, security officers and the airport police departments were allowed to use their judgment when deciding if it was an accident, or if it was the specific intent of a person to take a gun into the airport. That discretion is long gone.

How can a person forget they have a gun in their possession? Trust me, it happens. And when it does, your heart will drop when you realize what you have done. I am a supporter of the license to carry law. I personally think more of us should take advantage of the wonderful privilege we have in this state. However, I have noticed that some people with a license to carry have a tendency to become complacent with the passage of time. You become so accustom to carrying your weapon you forget you have it.  Furthermore, Texas state law does not require a person to possess a license to carry to have a handgun in his possession as long as that person is on their own premise, premise under the persons control, or directly en route to a vehicle that is owned by the person or under the person’s control.  With the ability in Texas to have and possess weapons so easily, it is not uncommon for people to be very comfortable with weapons, even if those individuals have not chosen to obtain their license to carry.

If you are a frequent traveler, you become so accustom to going through airport security, you hardly even think about it. If you are comfortable around weapons as well, you are more likely to become somewhat complacent with the firearms. That’s when it happens. A person who has worked hard all their life, gone through a rigorous background check just to apply for their license, is now arrested, jailed and facing a felony charge. Please contact me as soon as possible to discuss your case. It’s important to take a proactive role with the district attorney as soon as possible.

In Texas, there are numerous prohibited weapons and firearm charges that can result in prosecution including the following:

People who often carry weapons or knifes need to be extremely cognizant of when and where they carry. I’ve had numerous clients that have inadvertently carried their handgun into a place where it is prohibited – school, courthouse, polling place, and the airport. These offenses can carry serious penalties and repercussions. If you have been arrested for any gun charge or weapons charge, please contact me as soon as possible.